I am going to step away from my Joy of Fly Tying series again, and do another Fly Focus post. If you remember, my Fly Focus posts focus on a favorite fly of mine which I don't teach in my beginning tying classes. These flies could be something I invented, something I love to tie, or something I just think looks really cool. Today I am going to be focusing on the Stimulator.

I've been on a Stimulator kick lately. I tied up a few while tying at the Film Festival in River Falls, WI two weekends ago, and I tied a couple gross of them at the Great Waters Expo last weekend. Whatever a gross is... it sounds like a lot...

I like to tie Stimulators at shows because they are big and easy for my fans and groupies to see from across the table. And they look good. I used to tie smaller flies, especially parachutes, at shows like this, but when there are several rows of people around your table trying to see what you are doing, the poor people in the back row can't see such a small fly. Not that anything like that ever happened, but, you know, it could. I want to do what's best for my fans... 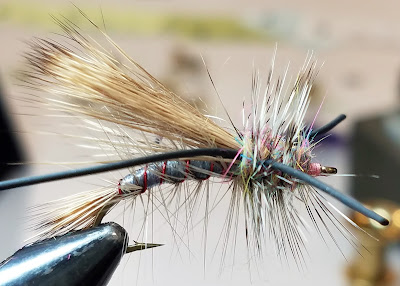 The Stimulator was originated by Randall Kaufmann to imitate stoneflies out west. Here in the frozen North we don't have all that many stoneflies, although there are some that are around at various times of the year. I like to use a Stimulator as an indicator dry fly, hanging a nymph a couple of feet below it. It's super buoyant and I like to tie them in bright colors so they are easy to see. And every once in a while the Stimmie catches the fish while the nymph goes unnoticed. It works great in this regard. 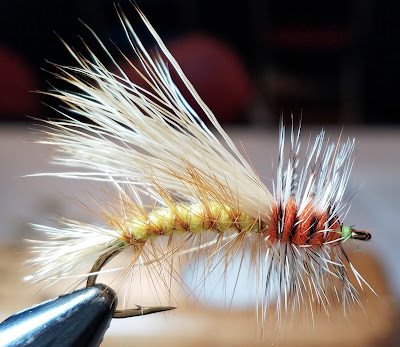 It also can imitate a grasshopper in a pinch. It's not that much different from an old Joe's Hopper, and with rubber legs it can look like a hopper kicking its way across a pool. It's also a good fly for panfish and bass. In other words, it's a great fly for many situations. You should fish it!

Let's see how to tie a Stimulator, shall we...