It's "Wonderod Month" in one of my favorite Facebook groups that is geared towards fishing with vintage fiberglass fly rods, which just happens to be one of my favorite things to do. If you don't know what a Wonderod is, what rock have you been living under for the past 70 years? Shakespeare Wonderods were one of the most popular line of fly rods ever made, and most of the Wonderods that I have cast have been very nice casting tools, as well. At this point in time I only own one Wonderod, a sweet little 910UL, which is a 7' 5wt, or in other words, the perfect panfish fly rod.

I haven't gotten out much during this "Wonderod Month", but I have found an hour here and there to sneak over to one of my local lakes and tease some bass and bluegills. Every time I have fished this month I have used my Wonderod, and every time I have used my Wonderod it has had a black foam spider with orange rubber legs tied onto the end of the leader. And I don't mean that I have used the same pattern all month long, I mean I have used the same fly. This one fly has caught almost 200 fish, and it just now is starting to fall apart. I guess I need to tie another one, huh? Oh, hey, that will make a good tying video for the ol' blog...

Most of the fish I have caught have been in the small-to-medium size range, but there have been a handful of bruisers. Below are two of the best, a big ol' bluegill and a moderately sized bass. 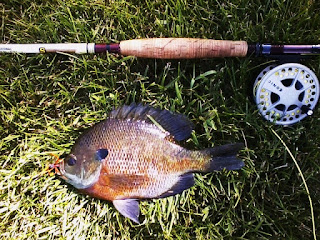 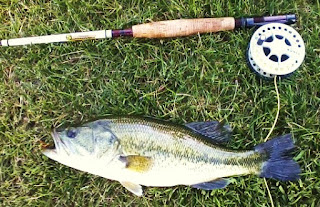 Happy "Wonderod Month" to you and yours!

As you may know, I am a huge fan of fiberglass fly rods. Preferably vintage, but modern glass rods have their place, as well. Other people I know feel the same as me, or, if not exactly the same, they at least think glass rods are cool, even if they still mostly fish with graphite. A bunch of us glass lovers recently got together for the 2nd Annual Twin Cities Glass Cast (that's just what I am calling it; it doesn't really have a name...) to try out each others' glass rods and have a bit of fun. And fun we had!

Much like the 1st Annual T.C.G.C., the 2nd Annual T.C.G.C. was made up of a relatively small group of guys, five to be exact. The only difference was that the 1st Annual had three Minnesotans and two Wisconsinites, and this most recent T.C.G.C. had three Wisconsinites (Ron, Brian, and Jon) and only two Minnesotans (Richard and me). Despite being outnumbered, we Minnesotans were treated respectfully by those from our neighboring state. That may be due in part to the fact that we brought the most rods with. And really, if people from Wisconsin are treating you with respect, who cares what the reason is!

The day started slowly, with each participant bringing out a rod or two. But then those rods made us think about other rods we wanted to show off. And then those rods got us thinking about other rods we wanted to show off. Pretty soon there were dozens of rods being uncased, waggled, and put to use. Rods were admired, cast, put down, then cast some more, then handed off for others to try. Then it would start all over again. Most of the rods were vintage pieces, a  few were modern rods. All of them had to be cast by all of us, and then we would stand around and talk about how they felt and what we liked or disliked about them. There were old rods from Fenwick, Heddon, Shakespeare, Sage, Orvis, Winston and others. New rods from Epic, Echo and Fenwick. All of them were fun to try out and critique. It was a great time!

I don't know if there is going to be a 3rd Annual T.C.G.C., but if there is, you should try to wrangle yourself an invitation. 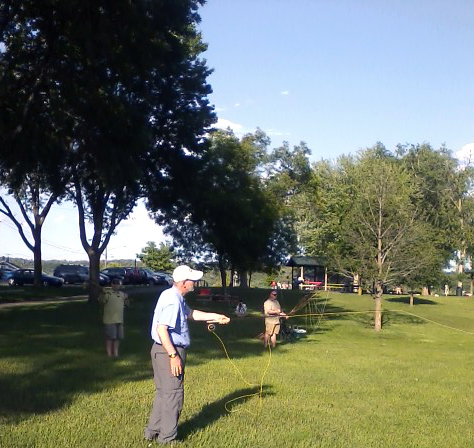