I may be biased in this regard, but as far as I can tell it's almost impossible to not love The Riffle. If you do love this blog there are now three ways to show it. Not only do we have stickers that you can slap on the rear window of your Yugo, your tackle box, or your forehead...

But we also have fun buttons that go perfectly on your shirt, your backpack, your gear bag, or even your ear lobe, if you're into things like that...

And we also have super cool magnets, which you can stick on your fridge, the bumper of your Yugo, your tool box, or, for those of you with a metal plate in your skull, your forehead...
If you would like any of this stuff to show your love for The Riffle, head on over to the Store page and place an order. While you're there, check out all the flies we have for sale, all of which are hand-tied in the Good Ol' USA by an expert fly tyer. You can even request a quote for custom flies, if you have a fly in mind but you can't find it anywhere.
Posted by Scott at 9:33 AM No comments:

I love to tie a lot of Female Adams Parachutes, but I'm not really sure why. If you aren't familiar with a Female Adams, it's pretty much just a regular old Adams, only with a little yellow egg sac on the back end. I don't know if it actually looks like a female mayfly to the trout, or if they even notice the little yellow egg sac. Maybe they do. If I was able to think like a trout I probably wouldn't be typing this right now, because I most likely wouldn't have fingers. Let's just assume they do, and I will continue to tie them. Sounds like a plan to me!

Hey, I will also teach you how to tie a Female Adams Parachute. What a guy, huh? You can tie them in pretty much any size, but I usually tie mine in 14s and 16s. If you get much bigger than that, there aren't that many mayflies of that size around here. And if you get much smaller than that, the egg sac gets so small that you might as well just tie a regular old Adams.

All of the Female Adams I have ever seen have had a yellow egg sac, so that's what I am going to tie. I have seen a bunch of mayflies with orange egg sacs, though, so you could probably tie them in that color scheme. And trout seem to like pink, so you could probably tie some of those, too... just remember what my boss at Bob Mitchell's Fly Shop always used to say, "There are no rules in fly tying!"

Let's tie one, shall we?

Hook: Tiemco 100 or any other standard dry fly hook, Size 10-22
Thread: Gray 8/0 (or Red 8/0, if you like that look, like I do)
Tail: Brown Mayfly Tails
Post: White Antron yarn
Hackle: Brown and Grizzly rooster, sized for the hook
Egg Sac: Yellow dry fly dubbing
Body: Gray dry fly dubbing
Posted by Scott at 9:19 AM No comments:

Today marks the last day of the trout season around here. Since I am not out on the water, I thought it would be fun to take a pictorial look back on the season that was. Join me, won't you?

This is the second in my Rod Love series of blog posts. Again, just like on the first post, don't let the name Rod Love turn you into a dirty bird. This is about one of my awesome fly rods, not some sicko perv story, okay? Now that we have that out of the way, let's talk about fly rods! 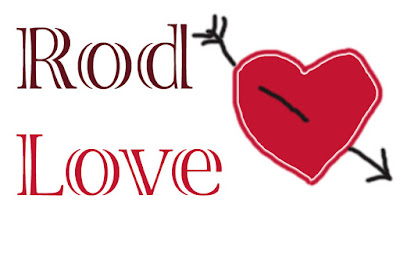 Actually, just one fly rod, my Scott F803/3. This beautiful rod was built for the Sansui Company's 100th anniversary. I know that because it says so right on the rod. Sansui is a Japanese company that used to make audio components and now sells televisions. I am not sure why Scott made a rod to celebrate the Sansui Company, but in the long run, who really cares?

This rod is sweet! I wanted a longer 3-weight than I had, in order to help keep my backcasts out of the weeds when I fish in small, overgrown brook trout streams late in the season. And so I can make some longer casts while fishing for panfish in any of the thousands of lakes around here. It does both of those things perfectly, and it also throws a beautiful tight loop, just like all my other Scott rods. If you have never had the chance to cast a Scott glass rod, get up off of your davenport right now and go find one! They are some of the sweetest casting tools you will ever lay your hands on. 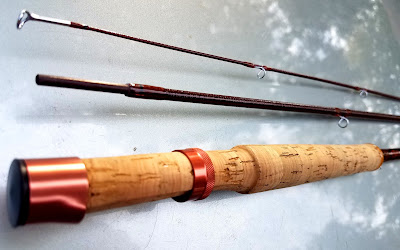 It's also good looking! Scott has made glass rods in several colors over the years, including yellow, brown, and black, but this is the only model I have ever seen in this deep burgundy color. Maybe they only made these for the Japanese market? I don't know...

Scotts are some of my favorite glass rods, and this F803/3 is a wonderful addition to my arsenal. I Love this Rod!

There is not really anything new about the Mushroom & Swiss Bugger. It's pretty much just an ordinary Wooly Bugger, which has been around for decades now. The only thing unique about it is the color scheme. It's full of browns and olives and yellows and blacks and other shades of brown, and when you put it all together it turns into a real fish catcher. Especially in the late summer or autumn times of year. I don't know exactly what the fish think it is; maybe a small brown trout. Or maybe a sculpin or some other kind of small baitfish. Whatever it is, they oftentimes can't get enough of it.

As I mention in the video, I like to cast it across stream, or even slightly upstream, towards the far bank. Then I usually mend the line a couple of times to help the fly sink a little bit. Then as it's gets below me I start stripping it in in short, sharp bursts. Be ready for some fast action!

Let's watch how to tie it, shall we?