I think it was Andy Warhol, or was it Andy Griffith?, who said that everyone would be world famous for 15 minutes at some point in their life. Well, if that's true, I've got about 7 minutes left...

I was unexpectedly asked to be on a segment of the local cable access news show, New Brighton Now! a few weeks ago. I guess the host, a very nice woman named Lynn, noticed that I teach fly tying classes through the Parks & Rec department. She must have been having an extremely slow time of finding guests, because she emailed me and asked if I would want to come on the show and talk about my classes. She even said I could tie a fly if I wanted to. Any time I get the chance to potentially embarrass myself in front of dozens of people, I jump at the chance, so I said I would do it.

The show taped a couple of Thursdays ago, and although I had been nervous leading up to it, I thought the interview and the tying demonstration went well. I knew I would only have about 3 or 4 minutes to tie, so I chose a simple pattern, a beadhead wooly bugger, and I got all of the materials ready before we started taping. I even pre-beaded the hook, which is something I hate doing. The camera didn't get quite as close to my vise as I had hoped it would, but I think the viewers could get a pretty good sense of what was happening. Take a look and see what you think...
Now that I only have 7 minutes of fame left, I suppose I better figure out how to use it. If you have any ideas for me, let me know.
Posted by Scott at 9:35 AM No comments:

I have done some production tying over the years. Quite a bit, in fact. And after all that time, I can definitely say that I have come to a concise, and somewhat well thought out opinion on production tying, and that is: I am not a huge fan of it.

Not to say that I despise it or anything like that. It's just that my preferred style of tying is too haphazard to be a good production tyer. I like to have something playing on the TV in the background, like sports or whatever TV show I happen to be hooked on at the moment. And that TV viewing has a tendency to take my focus away from the fly for minutes or hours at a time. Good production tyers need to stay focused on the task at hand. I don't do that.

My fly tying desk can get totally disorganized in a matter of seconds when I am tying. I don't like to prepare things in advance. Put 8 dozen beads on hooks before I tie a single fly? No thanks. Go through all my necks and saddles and divide up all the feathers by size? I would rather watch paint dry. I don't even like to keep my scissors in my tool hand while tying, which is something one of my fly tying mentors said was an essential part of being a proficient tyer. I'll gladly set my scissors down and pick them up every time I have to cut something.

Despite all these things that make me a bad production tyer, I have done quite bit of it. One summer, when I still worked at Bob Mitchell's Fly Shop back when it was in Lake Elmo, MN, I tied something like 70, or 80, or a billion dozen Kinni Sulphur parachutes for the bins of the shop. I still don't know why all of our customers chose that summer, when our two other part-timers, Gabe and Ron, were off gallivanting around the globe, to buy so many Kinni Sulphurs, but since I was the only henchman around, it was my job to tie them.

I haven't tied that many flies since, but this winter I did get an order for several dozen from Lund's Fly Shop, and I am very happy to announce that I am almost done with the order. I did some self-reflection, looking back at my history of production tying, and came to the conclusion that, since I am such a bad production tyer, I better get started on this order early. And I did, starting back in December, or maybe even November.... The flies don't look too bad, either, which is the most important thing.

Maybe I don't dislike all this production tying stuff all that much, after all...just don't ask me to tie another billion dozen like I did that one year! 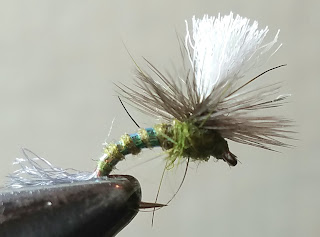 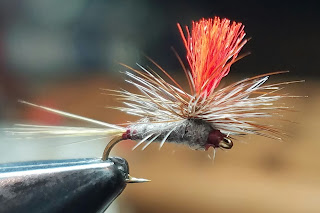