Tying In Hand with Cole Madden

This article was originally published in The Drake magazine several years ago. It's a look at how a local fly tyer, Cole Madden, did something that most of us would never think of doing: tie ornately dressed salmon flies without the use of a vise. It's really something to see, and I consider myself lucky to have witnessed it firsthand. Not that it has inspired me to try it, but it was interesting, nonetheless...

In every facet of life there is a movement towards that which is new, high-tech, and brings an ease of use. Computers need to be faster, clothes need to be trendy, and phones need to have more capabilities. In the world of fly fishing, there is a calling for rods to be faster and more powerful, reels to be lighter and stronger, and artificial flies to be more realistic. This is a natural trend, and I am not one to disparage it. I like to use fast computers as much as the next geek. But I do know a guy who eschews technological advances, in his fly tying as well as other facets of life. He’s a college student by the name of Cole Madden, who got into the art of tying classic salmon flies a couple of years ago, because, as he stated, he “enjoyed tying more than fishing, and (he) wanted to work on something that was more complex and developed than the regular dries and wets. Like when you start reading chapter books instead of picture books.” That alone bucks the trend of tying new-fangled flies. But Cole took it a step farther, when he decided to tie these old-time flies the way they were originally tied – without a vise!

Cole is a 20-year-old Junior at the McNally Smith College of Music in downtown St. Paul, Minnesota, where he is learning more about another passion of his, music, while studying Music Production. He grew up just across the border in Hudson, Wisconsin, which is a short drive from several prime trout and smallmouth streams, namely the Willow, Kinnickinnic and Rush Rivers. Cole has spent many hours on these fine rivers, but as he stated, tying flies has brought him his most enjoyment.

Tying flies without a vise is almost unheard of these days, but that was not always the case. Fly tying vises didn’t show up on the scene until the mid- to late- 1800s, well after the arrival of ornately designed salmon flies. Back then it was commonplace for fishermen to tie their flies “in-hand”. Today, tying with modern materials would be almost impossible without a vise, but the unique materials that were used, and in Cole’s case still are, allow this niche to survive into modern times.

I sat down to watch Cole tie one of his beautiful flies, or - to be more exact, I watched him tie part of the fly. We met after hours at our local fly fishing hangout, Bob Mitchell’s Fly Shop in Lake Elmo, Minnesota, so Cole could feel free to spread out his large cache of exotic materials. As a general rule it takes him two to three hours to tie one of his flies in-hand, so he had been working on this particular fly for about an hour already before I met up with him. The process is lengthened by the absence of a vise, but really the abundance of materials, especially procuring all of the layers of the wings, is what takes up the most time.
Seeing how much work goes into tying one of his flies without a vise, I asked Cole exactly why he started doing this.

The fly Cole tied for me, an unnamed beauty that already had some striking claret-colored hackle palmered over the body, was about to get a guinea feather installed as a throat hackle, and then I would get to see how Cole tied the wing on. When I first saw the in-progress fly, Cole had placed it on the table top - with a length of thick thread hanging off of it. Having never tied an old-style fly, or any other fly, in-hand, I had made some assumptions about the process. I assumed there was copious use of half hitch knots to make sure the fly didn’t bust apart at inopportune times. I was shocked to find out that Cole never uses knots, other than the finishing knot at the end. The special wax he uses on the silk tying thread is so sticky that it stays in place even when there’s no pressure being applied to it. He can pretty much lay the unfinished fly down on the table whenever he needs to, with little fear of having it unravel.

The wing is what’s most intriguing. Cole ties some of his salmon flies with very intricate “married” wings, but for the most part he uses “mixed” wings. Mixed wings still require a deft touch, but are not quite as delicate as married wings. On the fly I watched Cole tie, he cut eight similarly sized slips of beautifully colored feathers for each side of the wing, including three sections of turkey feathers brightly dyed in primary colors, slips of both Florican and Kori Bustard feathers, mottled turkey, and the obligatory Golden Pheasant tippet and tail. Tying a mixed wing is just like it sounds: the slips of feathers are pretty much just held together in a clump - and then tied on the hook with tight turns of thread. The colors mix and mingle together to form a vibrant wing that rivals the most intricate of married wings, with a shorter amount of time invested.

One of the most difficult aspects of tying a fly in-hand is dubbing. When tying a fly conventionally, the weight of the bobbin keeps the thread taut while twisting on the dubbing. Without a bobbin, the thread tends to twist along with the fur. It takes some deft finger manipulation on Cole’s part to get it to work well, but over time he has figured out exactly what needs to be done to get the fur on the thread.

Another interesting twist to Cole’s story is how he gets the hooks he uses for his salmon flies. Proper salmon hooks can be expensive, even the ones that are made without eyes. Cole has learned how to deal with the costs. His father has long been a student of metallurgy, so Cole asked his dad to teach him a few things, and soon he was heating, bending and straightening some less expensive hooks (like Mustad’s 3366) into classically-styled eyeless salmon hooks. It takes him hours to make one hook salmon fly-worthy, but this is totally worthwhile to Cole, who values the time spent as much as he does the finished product.

Cole Madden’s ability to tie beautiful salmon flies in his hands is proof that modern techniques aren’t always the only way to do things. And the fact that he uses his brilliantly colored flies to catch trout and smallmouth bass in his local streams proves that you don’t always have to match the hatch if you want to catch fish. 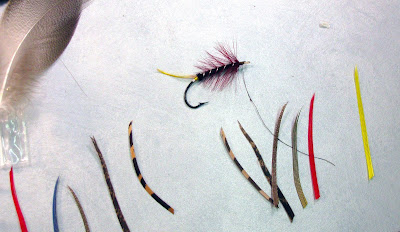 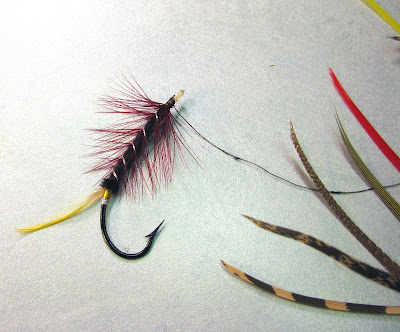 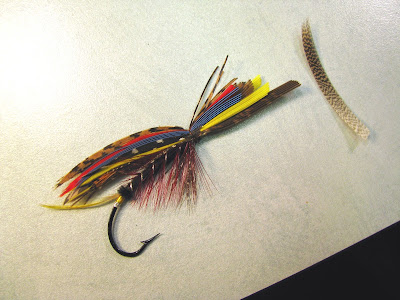 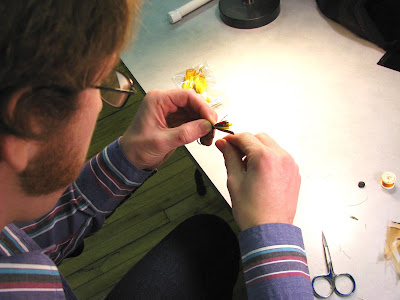 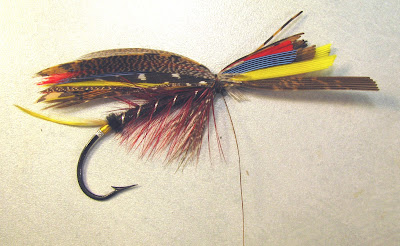 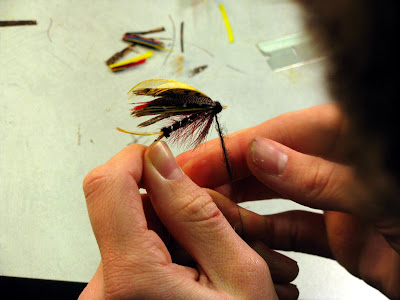 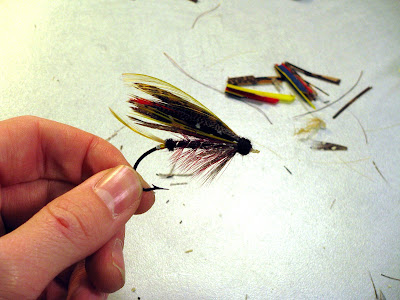 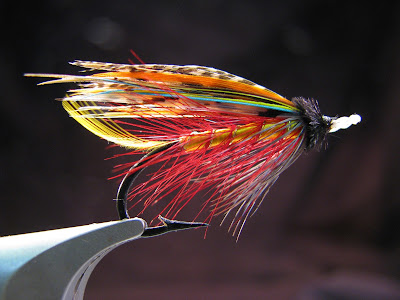 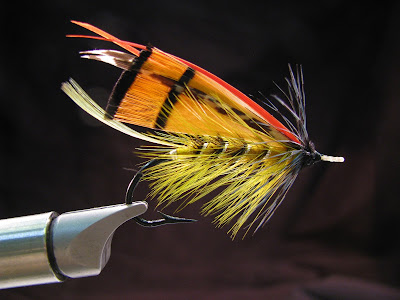 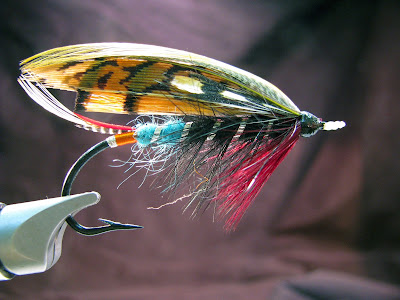