I am stepping away from my Joy of Fly Tying series once again to write about a controversial new fly. It's somewhat controversial because of its name, the Bloody Klink, but moreso the controversy stems from the hypothesis behind its design. I didn't initiate this hypothesis, but I find it intriguing, and so far my testing of this hypothesis seems to indicate that it is valid. 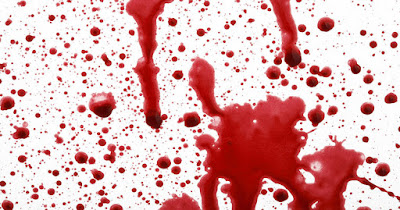 I heard this hypothesis for the first time about 15 years ago, as I watched a fly tying demonstration at one of our local fly shops. I don't remember who the tyer was that day, but I definitely remember his ideas, which were some of the most thought-provoking ideas I had ever heard, and they've stuck with me all these years. His hypothesis was that, as a mayfly is emerging through the surface of the water, it starts to pump blood through its body and wings, blood which is visible to the trout. So an emerger or dun that is supposed to imitate a newly emerged mayfly shouldn't be tied with a body and thread color that matches the adult mayfly; its body should be a light colored dubbing tied on red thread, so that, when wet, the red thread shows through the dubbing, making it look like blood pumping through its veins. What a novel idea!

I went right out and tied up some parachute flies like that to use on the Blue Winged Olive hatch that was happening, and I caught fish. Did I catch more than I would have with a traditionally colored fly? I don't know, but I did catch fish, so the theory couldn't be complete hogwash... I have kept some flies like this in my box ever since, and they always seem to work when I remember to use them.

Recently I decided to tie up some of my KlinkHansons in this color scheme. But I thought that I should take it one step farther. Not only would I tie the body with a light colored dubbing over a red thread, I would use hackle that was the color of blood, to really drive home the pumping corpuscle theory. This is the main reason I wanted to dye up some grizzly hackle with a claret color (see my previous blog post to get the scoop).


I don't know if this new Bloody Klink will work, but I don't see why it wouldn't. I am going to give it a try next time I hit a good mayfly hatch. I invite you to do the same. Maybe, if enough people fish with flies like these, we can turn this hypothesis into a theory, or maybe even a law. Or maybe I should just stop reading the dictionary entry on "hypothesis" and just go back to tying flies. That sounds good to me!
Posted by Scott at 6:00 AM