Several years ago I came up with a "rule" that might be valid, and it might not. I don't know if there's any way to actually prove it, but it seems like it has some validity to me. That rule states that "in all trout streams, any pool that is big enough to harbor fish will contain at least one fish that is over 14 inches in length."

I should explain that this rule is only good for streams in which brown trout are the primary inhabitant. Brook trout, in general, don't grow as big as browns, so therefore, when on a brook trout stream, I amend the rule a bit, changing "14 inches" to "10 inches". Any brown trout over 14 inches is a fine fish indeed, and any brook trout over 10 inches is just as impressive, so all in all, the rule means the same thing in both cases.

We don't have very many rainbow trout around here, so I am not sure what to do about them, but I have a feeling the brown trout rule would work just as well for rainbows...

Now, just because I believe there are all these nice, big fish swimming around in every pool, that doesn't mean you or I or anyone else is going to catch them any time soon. The rule has nothing to do with catching them, it only deals with their existence. But you can't catch them if they don't exist, so you might as well believe they do. Am I right?

I hadn't thought much about my rule lately, but then tonight I went fishing with my buddy, Bryon, on a stretch of a stream I hadn't been on in 10 years or so. I knew I had caught a big brown in there years ago, so I made my way down to a prime looking spot, looked around, and immediately remembered that this was the pool I was fishing when I came up with the rule. It was like it had just happened, even though it was more than a decade ago. The memory of that day pretty much exploded back into my brain. It was eerie, and cool at the same time. And thinking about my rule made me even more excited to start fishing... 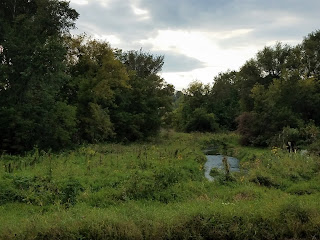 Well, no 14 inchers were caught tonight, although I did perform a heartbreaking LDR (Long Distance Release) on something that made my fly rod throb for a couple of seconds. It did nothing to snuff out my belief in the rule, that's for sure.