I don't know if you have a favorite First Lady. I never realized I did until recently, when I came to the conclusion that Grace Coolidge, wife of President Calvin Coolidge, probably holds that position in my heart. I know nothing about Grace Coolidge, other than that a lovely little trout stream that flows through the middle of Custer State Park is named after her. That's really all it takes to become my favorite First Lady... 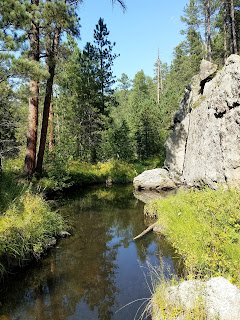 Grace Coolidge Creek is quite tiny, barely more than a trickle for most of its run, but somebody had the great idea of installing a series of several low-head dams along its course, creating several large pools or ponds that are full of trout. Mostly stocked rainbows with a few browns and brookies thrown in for good measure. Oh, and a few annoying chubs here and there, as well. Some of the fish can get quite large, as I can attest, as I have landed a couple of 18 inchers over the years. Most of the fish are between 8 and 12 inches, so essentially it's like every other stream I have ever fished. 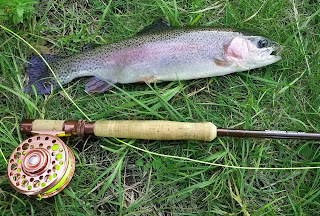 We took the family out to Custer for the first time last week. The family consists of the Wife and our four children: Girl #1, the Boy, Girl #2, and Girl #3. Oh, the Sister-In-Law came with us, too. The Wife and I took our three oldest children on a hike along Grace Coolidge Creek one afternoon. Since I am not very good at hiking along a trout stream without a rod in hand, I brought my Fenwick F755 with, but promised that I would only make 5 casts into each pool, so as not to disturb the hike too much. 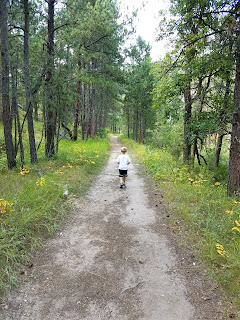 It was a beautiful hike, but I won't bore you with those details. Let's get down to the nitty gritty of my fishing stats during the hike, shall we? Here they are:


It was a fun hike in some beautiful country, but let's face it, the most impressive thing about it was my amazing catch ratio! I can't guarantee you will have as much luck if you ever get to fish Grace Coolidge Creek, because you're not me. But you should have a fun time, no matter what. Here re some pics from the hike: 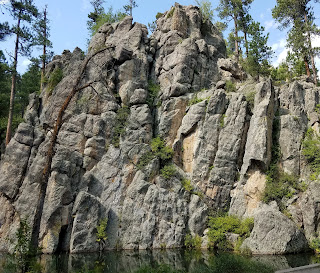 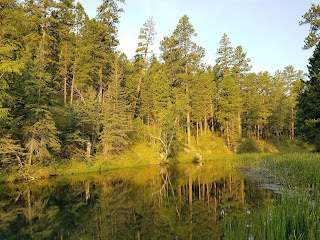