I learned about the Garcia Company when I was but a wee lad. My dad had an Abu Garcia spinning rod and reel combo, and he seemed to revere it as one of the best things ever to be developed within the world of fishing. Actually, now that I think about it, his rod and reel might not have had the Abu Garcia name on them, they might have only had Abu on them...Garcia was a separate company, formerly known as Garcia Conolon, and Abu was a Swedish company, and at some point they merged to form Abu Garcia, but Garcia Conolon had formerly been known ad Narmco...This company has a very confusing family tree which I am going to stop trying to figure out. I'm not a big history buff, any way.

One thing I do know about Garcia Conolon fly rods is that they usually were quite nice casting tools. They didn't always have as many guides as what is now the norm, but they did cast nicely. I have owned a few over the years, including one of their light blue jobs that looked like it had gotten painted in the same factory as 1970's kitchen appliances. The one thing that always stood out to me about old Garcia fly rods is that 99% of the fiberglass rods you see for sale have metal ferrules. Even the spendy olive-colored "Lee Wulff" models all had metal ferrules, and I am pretty sure they were made in the '70s when most other companies had gone away from metal ferrules...Of course, I could be wrong about the timeframe. And everything else, as well...

There are a few exceptions to that metal ferrule rule within the confusing Garcia family tree, though, which make that tree even more confusing. The Garcia Americana rods were made with fiberglass spigot ferrules. I am not sure if Garcia Americana was another company to add to the tree, or if that was just a model name or something else. I do know that they were made in America, and I also know that they were awesome casting rods. How do I know this? Because I own one! 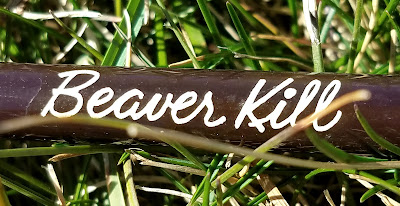 It's a Garcia Americana Beaver Kill, and it's a 7' rod rated for 5&6 weight lines. It's got a beautiful dark brown finish, nice spigot ferrule, nicely-sized cork grip, and it's a super sweet caster. Most older rods with a dual line rating always seem to cast better with the heavier line, but this Garcia casts a 5wt line better than a 6, in my opinion. Last fall I fished my favorite trout stream all day with this rod, and it handled nymphs, streamers and dries with equal aplomb. And I caught fish all day, so the rod must be great, right?