Chasing Rainbows on the Last Day of the Season

As I wrote in my last post, I went trout fishing a couple of weeks ago on what I originally thought was the last day of the Wisconsin trout season, September 30th. The trout season in Wisconsin has ended on September 30th every year of my 42 years on earth, so you can understand how I could have forgotten that the wonderful Wisconsin DNR had switched the closing date to October 15th this year, for the first time ever. Assuming correctly that I probably wouldn't have another chance to go trout fishing before October 15th, I wrote then about my last trout fishing trip of the year. It was an awesome day with lots of trout. So, yesterday was the actual last day of the trout season, and I caught exactly zero trout. Instead, I had a father-son date with the Boy, in which we did a lot of manly things like sweeping floors and eating chicken nuggets and playing with wooden trains and shoveling ice cream down our throats. It was awesome! We had a great time, and then when we were done the Wife and I did some things to get our yard ready for winter.

At the end of the day we all went over to my in-laws' house for dinner. They have the great fortune, at least as far as I am concerned, of living on one of the 10,000 or so lakes in Minnesota, so while the cooks were busy finishing up dinner, I snuck down to the lake to see if there were any fish still swimming around near shore. It had been a hot day for our part of country, so I was hoping the bass or bluegills might still think it was summer and be lazing around in the shallows. I only had about 15 minutes or so to fish, but that was OK. Things started out pretty slowly, even though fish seemed to be coming up and nudging my foam spider on every cast. Finally I managed to hook one, then another on the next cast, and another on the next cast. That last of the three was probably the biggest bluegill I have caught since June, but it was so unexpected I forgot to take a picture. 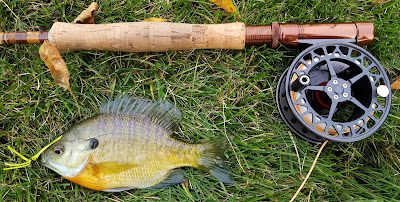 A few minutes later I caught a lovely little guy, and his bright yellow belly mirrored the leaves that were all around the lake. I looked around as my fishing was coming to an end, and up in the sky was a beautiful and completely unexpected rainbow arching over the lake. It was a wonderful way to end the trout season, even though there weren't any trout within 30 miles of me. What a fun day! 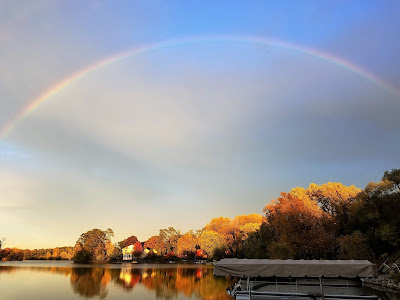 Gear used: I used my 7'6" 5/6wt vintage Cortland Pro-Crest fiberglass rod and my Cabelas WLX 4.5 reel, which is strung up with a no-name 6wt DT fly line. The Pro-Crest rods have a reputation of being fine casters despite being the color of baby poop. Mine lays out 50 feet of line with very little effort, so I don't care what color it is. Besides, I'm kind of used to baby poop by now...